Innovation in the Financial Sector: The Possibilities and Hurdles of the Digital Era

At the present time, we’re able to comfortably say that the wave of innovation that is sweeping across the financial sector in Latin America is sure to bring profound changes in the way we do business, and even the way we behave as a society. New technologies will either weaken or strengthen established financial institutions (like Banks, for one); it is yet to be seen which institutions will flounder and which will survive. Traditional, established banks will benefit from a series of advantages through these changes, but will also see their weaknesses exposed. In this article, we’ll discuss what banks can do to ride this innovation wave, what intrinsic benefits they’ll enjoy given their current position, and what disadvantages these benefits entail.

The innovator’s dilemma: 20 years ago, Harvard professor Clayton Christensen wrote “The Innovator’s Dilemma,” in which he argued that innovators usually fail to anticipate future innovation waves because they invest so much in their existing realities that they fail to imagine alternative possibilities. Steve Jobs is an excellent example of somebody who managed to turn this dilemma on its head; instead of dedicating his energies to continuously expanding the success of the iPod, he focused on developing the iPhone, a product meant to replace it. The vast majority of modern banks lack Steve Job’s innovative vision; instead of developing new products and services, they focus on maintaining the ones they already have. If banks are unable to innovate within their field, other business will fill the vacuum, disrupting the status quo. Banks are a perfect example of a type of institution that often suffers from “the Innovator’s Dilemma,” given their proclivity to wait for others to innovate before innovating themselves.

Many banks today have grown to enormous sizes thanks to their successful business practices, but there comes a time when their size becomes more of a hindrance than an advantage. When Facebook purchased Instagram for a billion dollars, it as a tiny company with no more than a dozen employees. Its reduced size allowed Instagram to innovate much quicker than its competition. Thanks to their collaborative organization (devoid of hierarchies) and lack of inefficient bureaucracies, startups like Instagram are able to create and launch new products quickly, without having to deal with long approval processes; this empowers their ability to experiment and innovate. If a startup comes up with a brilliant idea first, it’s certain that they’ll be able to profit from it much faster than its larger counterparts.

Given their rapid growth, banks are subject to incrementing operation costs that smaller startups simply don’t have. For instance, a bank that wishes to close a branch office or agency because of the increased digitalization of the market, will have to liquidate employees, terminate renting contracts, and assume a range of other costs. A virtual bank, however, has none of these external costs and can rapidly expand its operations. This proves the extent to which the size of large, traditional banks works against them in the digital era.

The confidence generated by an entity as powerful as an established traditional bank can hardly be matched by a small startup company. After years of service and withstanding various economic crises, existing banks have managed to craft a reputation based on trust - and that trust is what continues to motivate people to both use and pay for their services. New actors in the field have no prior relationships with clients and must focus their attention on building trust with their clients. If an innovative new technology emerges from within a bank, it will have the advantage of showing it to the world first, strengthening trust even further.

For years, banks have assumed that a country’s regulatory system is there to disturb their business, raising operation costs and making their services less effective and agile. However, when new actors appear in the financial sector, their first barrier of entry is overcoming the limitations of local regulatory systems that were designed for a different time and don’t accommodate to a modern technology or innovation. These systems tend to work against startups because their owners aren’t used to navigating them and don’t understand the intricacies of their workings; meanwhile, traditional banks are already used to the system and understand their possibilities and limitations. This provides them with an opportunity to adapt to the existing regulations without incurring the ire of national regulators.

If a group of innovators manages to topple the hegemony of traditional banking through the development of efficient, friendly new tools, banks need only blame themselves. A traditional bank has everything it needs to be the first to research, create, and launch innovative new technologies; its size and inefficient processes, however, hold it back. What is certain is that banks have options: they can choose to transform or choose to be transformed. The present wave of innovation simply won’t stop; either we ride that wave or let ourselves be carried away by the tide. Subscribe to our blog | Get the latest financial innovation news 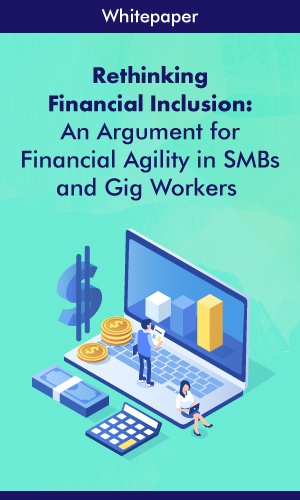